Made Equal sees relaunch at E3 Recruitment for Yorkshire members 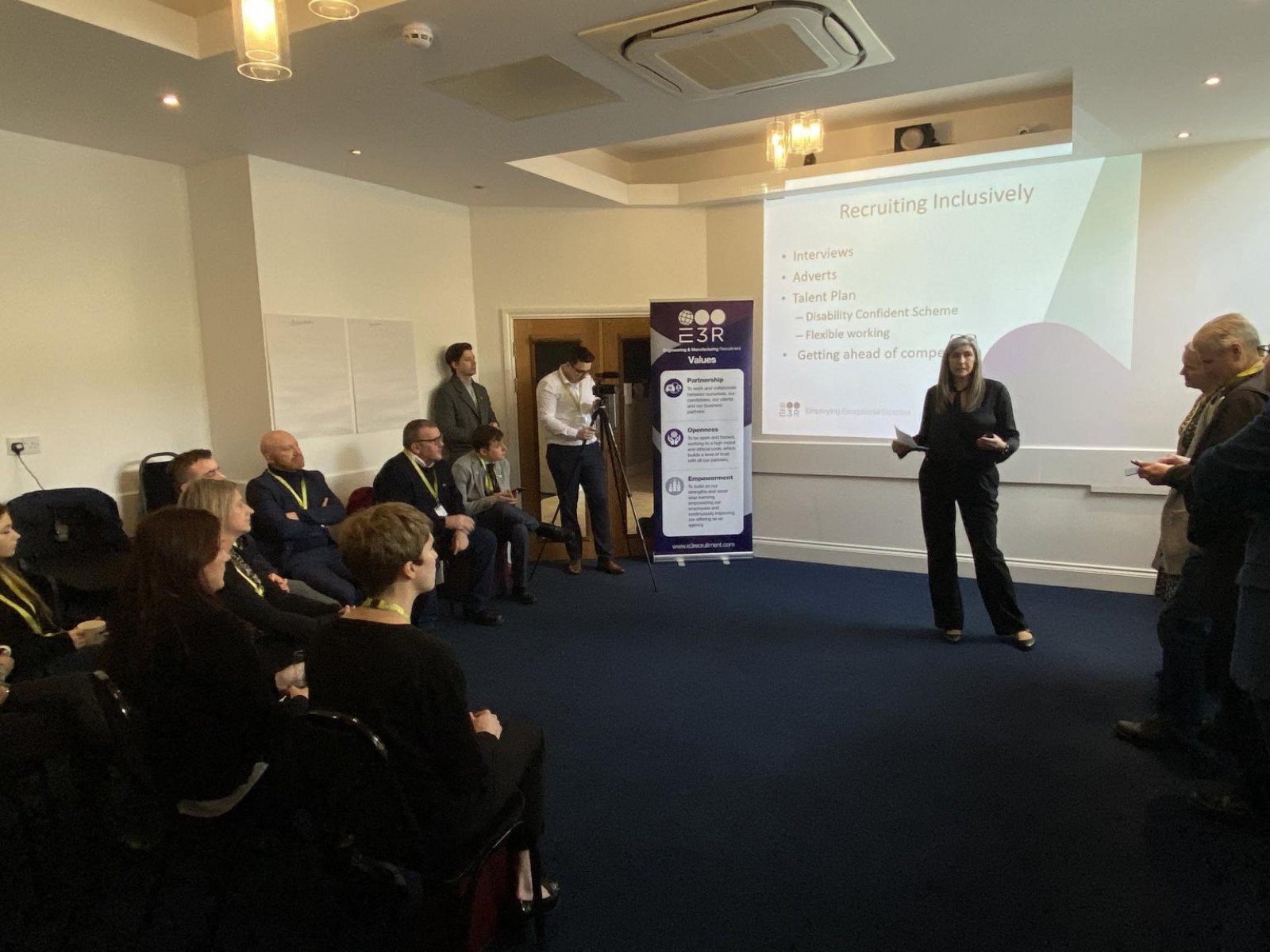 Last Friday, on the 21st of February 2020, Made in Yorkshire members attended the relaunch of the Inclusivity campaign, now titled Made Equal, at Patrons E3 Recruitment.

During the event, members were given an in-depth talk from E3 Recruitment where a range of topics including hiring, addressing mental health and inclusivity, were discussed.

Speaking on behalf of E3 Recruitment was Chrissie Gale, Head of People and Organisation Development at E3 Recruitment. She talked about the importance of the campaign saying, "When we are recruiting we need to make sure that recruitment, selection and employment should be fair, and equitable for everyone that applies for a job."

But as either an employee or employer, do you know what we mean by being diverse and inclusive? That was the first question proposed by Chrissie who challenged the attendees to name the 9 protected characteristics under the Equality Act 2010. In case you didn't know they are:

But as members soon discovered that list is not complete. In her examples, Chrissie mentioned the arguments being put forward to make Ethical Veganism the tenth protected characteristic. While other hot-topics such as the Menopause and Obesity were also discussed as subjects that employees need to make sure they're aware of.

Moving on, the group was then introduced to the Gender Decoder, a free-to-use online resource that will gender check your job advert for masculine or feminine words.

To increase the inclusivity of your job advert, you'll want to make sure you target both genders, female and male. However, subliminally you may be using keywords that target one gender over another.

One member who has used this service is Balmoral Tanks. When asked about their use of the software, Nicola Wagstaff the HR Advisor said that "We had a job advert for South Wales and when we sent the advert over to the site we found that it was for a feminine role."

The site came to this conclusion because it states, as an example, words such as Driven, Intellect, Logic and Adventurous are masculine-coded words while Collab, Honest, Yield and Connect are feminine-coded words.

Once you upload your job advert to the website, it will tell you whether your use of keywords leans your advert towards a more masculine or feminine structure. Likewise, it will also highlight what words are causing that tilt, allowing you to easily change the advert so that you can secure the all-important gender-neutral stance for your advert.

But in the face of increasing diversity and inclusivity, can you positively discriminate? If your workforce is 100% men, would you be able to advertise for a woman to increase your diversity?

This was something that one member, Joanna Dodd, the Legal Director of Clarion Solicitors, answered, saying, "From a legal point of view, people sometimes ask me if you can positively discriminate. The simple answer is no. You can't employ somebody because of their gender because that's discrimination.

The other side of the coin is positive action where you can deliberately target a certain group. For instance, you could code your adverts to be more feminine or equally you could place your adverts in places where there will be more people of a certain ethnicity. However, when it comes to the interview, everyone must be treated the same."

But, if you're reading this today, what positive actions could you, as an employer take? In her closing remarks, Chrissie discussed the Disability Confidence Scheme, link to their website is here, where you can get free help to recruit and retain 'great people.'

Run by the government, if you sign-up to the scheme you'll get a trained representative will give you a call to help you improve employee morale and commitment, secure high-quality staff while also drawing from the widest possible pool of talent.

In the words of Chrissie, "You can have somebody working in your business or team who is doing everything that they should be doing, but they're withholding their discretionary behaviour.

It's very clear about the importance of having the right managers in place to make sure that they are bringing the policies within your organisation to life."

On the other side of the coin, what if you're an employee? In this case, Chrissie introduced the attendees to the ABLE Futures project (See their website here).

This free service is for both employers and employees who want free, confidential mental health support. Once you've signed up, you'll get a range of support including regular check-ins, via text and even calls, where they'll make sure that you're doing ok.

After the presentation finished, members were given a book from the Made in Yorkshire team, which aims to help them think about diversity and inclusivity beyond the event. The book titled, Thank you for the Feedback, was introduced by Made in Group staff member, Iwona Sobolewska, who discussed its themes with the group.

Speaking after the event, Shaun Heys from ITW Rocol shared his reaction to his colleague, Joshua Gledhill attending the event saying, "Great to see colleagues supporting diversity and inclusion within the Yorkshire industry. Bringing back ideas of how we improve D&I within our own business and industry sector."

If you're a member of Made in Yorkshire, keep your eye out on our upcoming events, as we'll be announcing the date of our second #MadeEqual event in the coming weeks.