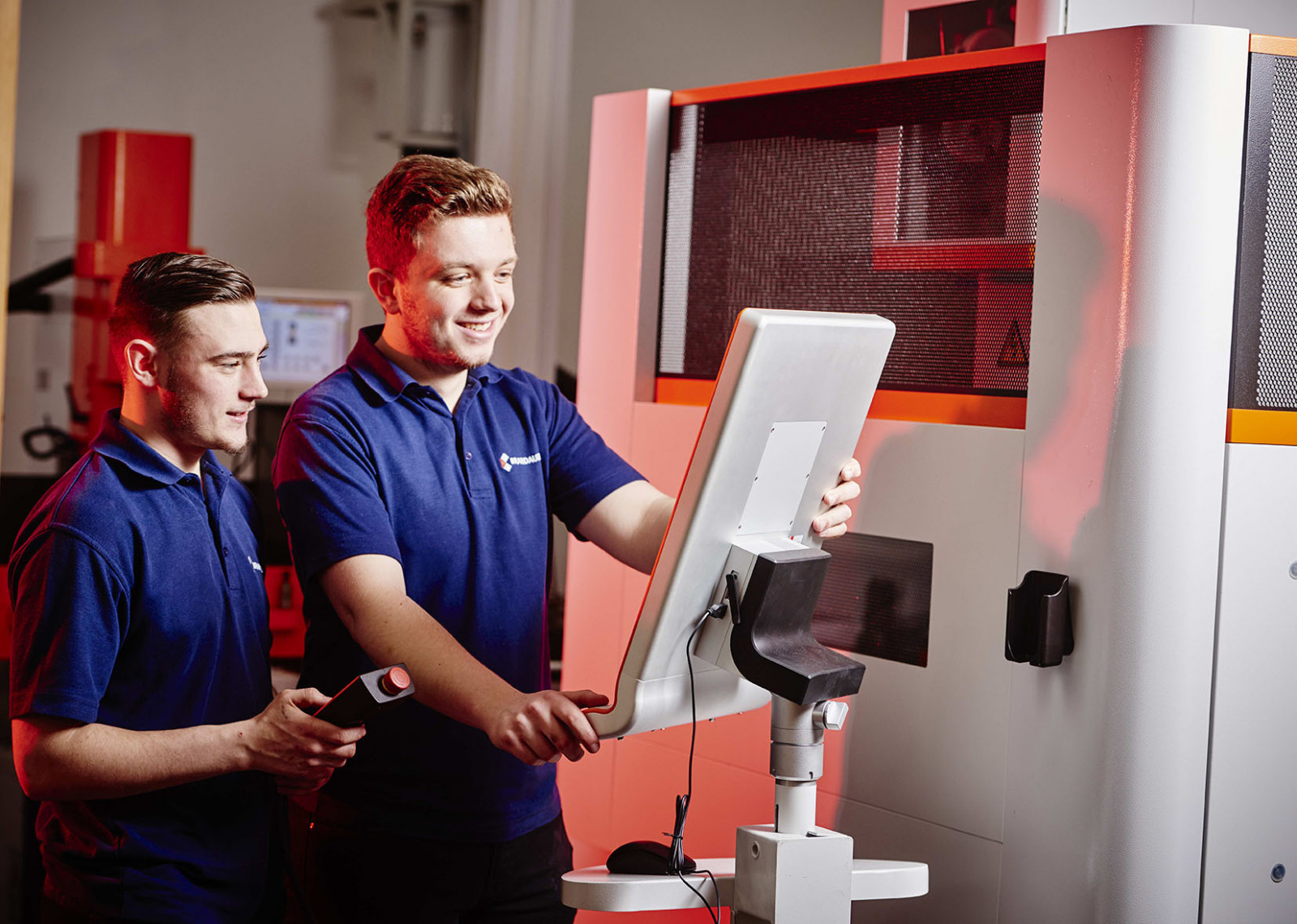 Amidst industry-wide worries of increasing skill gaps, talent retention, and a lack of new, skilled workers, one solution is emerging which is set to benefit everyone. The new wave of apprenticeships could well become the saving grace that the manufacturing and engineering sectors are looking for, and could in turn open up many new routeways for students.

Education Secretary Gavin Williamson recently stated that the prospects available for post-16 study are better than ever, specifically listing apprenticeships as a viable option for school leavers.

As many students recently received their GCSE results, it is expected that a higher number than ever before will be looking to become apprentices in specific industry sectors like manufacturing and engineering.

However, though significant strides have been made towards making apprenticeships an accessible and valuable option, there is still a lot of work to be done before this career path is fully realised. As it stands, going straight to university is still the standard, go-to choice for those leaving school in 2019.

But what about those students who don’t feel like university is the right choice for them, and would instead like to head straight into a working, skills-rich environment?

In an effort to significantly improve the state of apprenticeships and the ways in which the programmes are funded, the government introduced the apprenticeship levy in 2017. The aim was to encourage employers to take on more apprentices and further develop their existing programmes.

But, as can happen when it comes policies and funding, the levy scheme has not panned out exactly as many businesses, particularly SMEs, had hoped it would.

As so many Made In members are actively taking on apprentices to solve their skills gap problems and boost their local communities, we thought we’d delve into this issue to see what’s really going on and what could possibly be done to improve apprenticeships in the UK.

The apprenticeship levy was put into place in April 2017, requiring businesses to pay into a digital fund which will then be supplemented by a further 10% by the government. The compulsory tax applies only to larger companies with a payroll of £3 million or more, calculated at 0.5% of their pay bill.

If that seems fairly straightforward, then you may be wondering where things went wrong and why so many employers are calling for further changes to be made to the levy scheme.

One of the main problems lies in the fact that most of the funding which is put aside for apprentice training is not being utilised by these levy-paying companies. This information came to light when The Open University managed to secure the relevant data through a Freedom of Information Act request, revealing that, since the inception of the levy, only £108 million has been utilised out of the £1.39 billion fund that has been paid in.

This means that only 8% of the funding has been utilised and put back into developing apprenticeships.

Smaller companies who do not pay the levy tax are now looking at all of this unspent money and wondering why there isn’t a system in place for redistribution to employers who do not reach the £3 million threshold. The next logical question, then, is what happens to all of these unspent funds?

Well, after 24 months these funds will “expire” and be reclaimed by the government, rather than being redistributed.

However, recent changes have opened up a possible solution to the issue of unspent funds - within the West Midlands region, at least. As part of the Skills Deal established in 2018, the West Midlands Combined Authority (WMCA) gained unique powers from the UK Government which allows the transfer of unspent levy funds from large businesses to a regional Apprenticeship Levy Transfer Fund.

This fund is then used to train apprentices within SMEs in the West Midlands. Of course, the scheme is reliant on larger companies contributing their unused funds voluntarily - but so far many big-name organisations have done so, including BBC, National Express and the Wesleyan.

Once a company’s unspent levy are transferred to the combined authority’s fund, it is guaranteed to stay within the West Midlands region, going 100% to providing training within SMEs, and the risk of it becoming sunset (expiring) is taken away.

As it stands, deals like the one made by the WMCA could very well be the solution that small businesses are looking for.

If you’re a small-to-medium manufacturing or engineering company based within the West Midlands, and you’re looking to upgrade or establish your apprenticeship programme, register your interest on the WMCA site and find out more about the opportunities available to you.

Despite the introduction of the levy and subsequent efforts to promote apprenticeships, the majority of colleges and training providers are reporting that, due to a lack of funding, they are having to turn away students looking to become apprentices, as well as existing staff looking to upgrade their skills. One such training provider is Appris, a Bradford-based organisation who is on the forefront of improving the state of apprenticeship funding.

What we’re facing now, then, is a situation in which more young people than ever are interested in undertaking an apprenticeship - but many are being turned away. This is despite there being an abundance of funding readily available, with many larger companies willing to distribute their unspent levy (as seen within the West Midlands).

There is simply no system in place in regions like Yorkshire for SMEs to benefit from the funds which have been collected.

From talking to our Made in Yorkshire members, many manufacturers in the region are concerned about the sunset funds not staying within the region. This means that huge resources are not only being massively under-utilised, but are also set to be reclaimed by the government without any chance of it being put back into Yorkshire-based businesses who are in need of greater apprenticeship funding.

One such business is Actionplas, a Made in Yorkshire Gold Member who specialises in the machining and supplying of plastics in the UK.

As a non-levy paying company, Actionplas is very engaged with the development of their apprentices - and is therefore also concerned about the issues surrounding the levy. Ruth Gosnay, head of HR at Actionplas, discusses the problem with the levy by stating:

“In our local area, we have a huge amount of levy-paying businesses - the problem is that all the money in their pot that they have not utilised will be wiped off.”

Ruth goes on to explain how she is currently working with the council to establish a project to form connections with these companies who have not been utilising their pots, to companies who are interested in apprenticeships, in order to further develop the future-proofing of the industry.

What can be done?

Though there are some systems in place to help smaller employers to train young people, especially those aged 16-18, many SMEs have a limited budget for apprenticeships programmes. If these small businesses could tap into the unused levy in their local area, their apprenticeships could be taken to a much higher level.

It goes without saying, of course, that this would not only benefit the employer in terms of filling skills gaps and securing worker retention, but it would also be a huge boost to young people across the UK who could follow their interest in an apprenticeship without being turned away.

There is a myriad of ways in which the unspent levy could be better handled. Ruth Gosnay suggests, for example, a sponsorship programme in which the bigger, levy-paying companies are able to provide their levy surplus to any local SMEs of their choosing, ensuring that the funds stay within the region.

Another way would be emulating the Skills Deal made in the West Midlands, whereby a combined pot is collected from bigger companies who volunteer to redistribute their unused funds, which smaller enterprises can apply for.

Regardless of which method is chosen, it is clear that more work needs to be done in terms of getting the funding to where it is needed.

To further understand this issue and how best it might be resolved, we got in touch with the West Yorkshire Combined Authority (WYCA). We learned that some training providers in the region have already utilised all of their available funding, and therefore are having to reject applicants for apprenticeships.

The original idea for the apprenticeship levy was simple yet effective: any unspent money would go back into funding training and apprenticeships. One of the problems, the WYCA have found, is that levy-paying companies are simply not aware that they can nominate a smaller company to divert their unused funds to.

The WYCA also found that many companies in the region are keen to keep the funding at a local level, meaning that a more devolved approach will be required.

The Combined Authority states that this issue is poorly understood; their surveys indicate that a quarter of apprenticeship suppliers are turning away SMEs specifically due to a lack of funding. Despite the massive efforts which have been made in the last five years to shine the light on the value of apprenticeships, the system is not set up to properly support the new influx of young people looking to become an apprentice.

To combat this, a lot of work is being done through organisations like FutureGoals, with over 12,000 people being reached last year who previously were not aware of the opportunities available right on their doorsteps.

FutureGoals is a campaign delivered by the Leeds City Region Enterprise Partnership (LEP), and provides extremely valuable links between education and employers. It’s just one example of the efforts being made to address the skills gap and trade worker shortages across a myriad of industries - including, of course, manufacturing and engineering.

On paper, the prospects for apprentices and those who are seeking further training has never looked better. However, when you dig a little deeper, it’s clear that there’s still a lot of work to be done to ensure that the funds being raised actually go to where they’re needed, and that no more young people are turned away from their desired career paths. There are many people working hard behind the scenes to improve the current state of the apprenticeship levy.

Any manufacturing companies based in Yorkshire who require support in engaging with education and wish to reap the benefits of taking on loyal, ambitious apprenticeships should contact your regional LEP listed below.

Midlands members should get in touch with the WMCA to apply for funding for their own apprenticeship programmes.